William Blake Against The World Machine

“The bounded is loathed by its possessor. The same dull round even of a universe would soon become a mill with complicated wheels….” 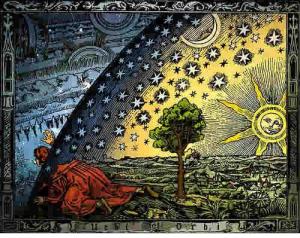 …If it were not for the Poetic or Prophetic character. the Philosophic & Experimental would soon be at the ratio of all things & stand still, unable to do other than repeat the same dull round over again….

It occurred to me this morning to embed the famous Flammarion engraving entitled Urbi et Orbi within the context of William Blake’s manifesto of his revolutionary spiritual radicalism, “There is NO Natural Religion“, for they belong together.

And these two belong as much together as they do also with John Donne’s An Anatomy of the World, his requiem for the soul and the Anima Mundi that so much seems to anticipate Nietzsche’s eventual declaration of the death of God, too.

(Although, James Lovelock’s “Gaia Hypothesis”, which conceives of the Earth as an integral biological organism, and equally Howard Bloom’s The Global Brain continue the same mental combat against mechanistic reductionism and linear-minded determinism).

Glancing over Donne’s An Anatomy of the World, I was suddenly struck by the lines…

(For who is sure he hath a soul, unless
It see, and judge, and follow worthiness,
And by deeds praise it? He who doth not this,
May lodge an inmate soul, but ’tis not his)

Upon reading that, I suddenly realised that by ‘inmate soul’ Donne was referring to is what we have been earlier discussing as “the foreign installation” — that which does not truly belong to the individuality and is therefore called “false self.”  From Donne, through Blake, to Nietzsche, the “death” of the soul was, it seems, a very slow, long, historically painful and traumatic process that was co-extensive with the birth and development of the mental-rational consciousness structure itself.

I have been reading Corey Robin’s book The Reactionary Mind: Conservatism from Edmund Burke to Sarah Palin. I’m grateful for the book as it has helped me come to some greater understanding — as much for what Robin does not say as for what he does say — of the reactionary attitude and mentality (“attitude” being the outward expression of the inward “mentality” or thought structure, so that in those terms, attitude and mentality are related, but not necessarily synonymous).

The contemporary reactionary mentality takes the form of what William Blake denounced as “single vision & Newton’s sleep”, as opposed to the “fourfold vision” as the higher state of the “imagination” or free consciousness, which is Man’s true or fully self-realised state in Blake’s terms. This is equally what Jean Gebser calls “the integral consciousness” in his great book The Ever-Present Origin.

The cunning of the reactionary mind, presently, is to establish a world regime based upon already antiquated Newtonian principles or Newton’s inadequate “Frame of the World”. In such a framework, human conscious action becomes impossible, and therefore any choice of alternative futures becomes impossible. Such a world, of course, would be totally unfree, although it would preserve the fiction, pretense, or illusion of freedom. The way the reactionary mentality has devised this delusion (which is what Noam Chomsky wrote about in his book Necessary Illusions and in Manufacturing Consent) is to confuse in the mind “motion” and “action,” or movement and act. This has become enshrined in the principle of “labour mobility” or “social mobility”, but which does not necessitate the exercise of consciousness at all.

Canada’s present conservative finance minister, Jim Flaherty, has even insisted that “there are no bad jobs“, insinuating that no moral choices at all should be involved in the selection of livelihood. All that matters is the smooth functioning of the economic machine. Apparently, a career as a mafia hitman is, in strictly statistical terms, equivalent to that of a nurse or a doctor. It’s all GDP and economic activity.

In a past post, I quoted the words of a conservative Canadian senator, Hugh Segal, as exemplary of the attitude of the contemporary reactionary. Mr. Segal’s definition of “freedom” as the liberty of movement, and the muting or dampening of civil rights or political rights that it implied, is exemplary of the deceit exercised by the reactionary,

“We are an open society with the free movement of people, goods, services and capital. This has always been the goal of those of us who are free traders at heart. Limiting this freedom for charitable foundations would be a destructive and retrograde step.” (“Tory rhetoric creates chilly climate for free speech”, Globe and Mail, Monday, May 14, 2012)

Now, what this “ideal” envisions is the reduction of all action to merely motion. It is a conception of “freedom” that corresponds to a Newtonian-Galilean ideal of friction-free movement through space, which is the ideal of a perpetual motion machine. Mr. Segal’s rationalisation for the suppression of free speech, dissent, or opposition even in the name of “liberty” is that these democratic or civil rights operate as a kind of friction against the reactionary utopian ideal of a national or global economy functioning as a single, uniform perpetual motion machine quite independently of human will or consciousness.

This is, in fact, the views of arch-reactionary Thomas Hobbes, of a society in which dictatorship or absolute monarchy can function even more effectively to preserve human “liberties” than a republic or a democracy in which the public exercises a share of power, or even is, in effect, the only sovereign. It is the same argument that was promoted by Bush-era neo-imperialist Niall Ferguson, who counseled that subjugated peoples should be granted every economic freedom, but no political rights or share in political power at all. The “masses” should have no power at all to determine the shape or destiny of their societies, which should be solely invested in the hands of an “enlightened elite” of self-interested capitalists.

It is the same situation that drew neo-liberal economists and “free market” ideologists like Milton Friedman and (Margaret Thatcher’s favourite) Friedrich Hayek to Pinochet’s Chile to square the circle of economic libertarianism while heaping praise on Pinochet’s brand of political and social dictatorship and murderous tyranny.

How are they able to square the circle in this way? Only by reducing action to motion, in effect, and this is Blake’s brilliant insight into “single vision & Newton’s sleep,” and his hatred of the British utilitarian philosopher John Locke (the darling of the economic libertarians).  It is the perverse outcome of an entirely mechanistic philosophy that confuses, deliberately in many cases, action with motion, and is therefore able to persuade the many that “freedom” and “liberty” are exactly the same, when they are not. You can be completely deprived of your freedom to create, but still have liberty of unimpeded movement or motion. And this has been the real success of the project of “perception management” as was documented by Adam Curtis in The Century of the Self.

Corey Robin put it rather bluntly in assessing the Hobbesian argument:

“As Hobbes understood, it takes an enormous amount of repression to create the type of men who can exercise their “Liberty to buy, and sell, and otherwise contract with one another,” without getting stroppy. They must be free to move – or choose – but not so free as to think about redesigning the highway.”

This is the real issue of Blake’s revolt against the tide of the times. Real freedom is the ability to act creatively, not just an issue of arrested, unimpeded movement or mobility of the body. The insight that real freedom is the freedom to create is what underlies Rosenstock-Huessy’s definition of an authentic citizen: a true “citizen” is someone who is capable of founding a city. This is the act of creation in time, not of mere motion or “mobility” through space. It expresses the conviction that a true citizen is the freely socially innovative, imaginative, creative.  So, just as the creative “act”, in the reactionary mentality, must be reduced to a mere mechanical “motion”, so freedom for the masses must be reduced to a mere “liberty” of movement while preserving the privileges of the ruling elite to alone act. And correspondingly, the “citizen” in the classical sense is reduced to a consumer or a client, not a potential creator or innovator.

And, of course, this parallels what is now referred to as “the infantilisation” of human beings. The potentially creative citizen is daily fed the equivalent of ideological pablum, and reduced to a childish condition of dependency, which is the whole point of it. The deconstruction of the soul, as creative principle (being Blake’s “Poetic Genius” in every living being, and which is, in fact, their life itself) parallels the efforts of reactionaries to get human beings to sacrifice their true freedoms for the mirage and hallucination of “liberty”, for the sake of the perpetual motion of the World Machine.

There is a Biblical precedent for this: to “sell one’s birthright for a mess of pottage” as Esau did to Jacob, and subsequently became disenfranchised.

12 responses to “William Blake Against The World Machine”