In yesterday’s posting on Giotto, Picasso and Aperspectival Consciousness, we briefly (perhaps all-too briefly) traced the turbulent unfolding — in “agony and ecstasy”, as it were — of the third dimension of space (or, rather, the tripartition of space into spaces) to consciousness and perception that was prefigured in the Early Renaissance/Late Middle Ages and represented in the works of Giotto and Petrarch; proof that very big things often arrive in very small packages — or on little dove’s feet.

The unfolding (or “evolution”) of a new “dimension”, as I mentioned, also involves a corresponding “in-volution” befitting the law of dynamics that states: every action has an equal and opposite reaction — that is to say, a coincidentia oppositorum. Standard histories of the Renaissance and Late Middle Ages very seldom pay attention to the “in-volution” aspect of the transition — the restructuration of consciousness, perception, and cognition —  although this is now what is usually intended to be understood by the term “co-evolutionary” — the co-evolution of cosmos and consciousness.  Or, as the great Sufi mystic and poet Rumi once put it, “the whole universe is a form of truth”.

It is heartening to me to see that more and more people are beginning to pay attention to this “involution” aspect, after centuries of neglect of, indeed suppression of — “subjective values” and the act of perception itself.

We see, in the history of unfolding perspective consciousness from Giotto to Descartes, a gradual intellectual mastery of space — and especially the third “dimension” — through this tripartition of reality, although the histories recount the struggle the perspective artists (and later the scientists) faced in gaining acceptance for what was paradoxically referred to as being either “perspective illusionism” or “perspective realism” (or “naturalism”). Perspectivism was quite controversial for that reason. It was suspect, and came very close to being proscribed by the ecclesiastical authorities of the day, as it was to be in the Islamic world. The arguments made by the perspective artists to win acceptance for the innovation of perspectivism — that the tripartition of spaces was a visible metaphor for the Holy Trinity, or that the relationship between infinite and finite spaces was a visible metaphor for the relationship between time and eternity — were the very kinds of arguments that got perspectivism proscribed and banned in the Islamic world as “idolatry”.

Indeed, the acceptance of perspectivism brought with it some unintended consequences — a radical restructuration of the meaning of “truth” and a radical reconstruction of the meaning of “human nature” as well as knowledge shifted from an emphasis on the authority of the ear to the authority of the eye and to what was visible and demonstrable. If the emphasis was on time and the meaning of time in Christendom and the organisation of space was neglected, in the Renaissance this shifted radically towards space, and the negligence of time. As Owen Barfield has capably shown in his book Saving The Appearances: A Study in Idolatry, it was arguments about the nature of Truth that underlay the trial of Galileo by the Inquisitors, and the same is true of Copernicus and Descartes, and this is very much related to the shift from time-orientation to space-orientation of consciousness. Perspectivism is about space and spaces, and it might not be too much of an exaggeration to suggest that the Age of Revolutions followed, logically, from the seeds of perspectivisation planted by Giotto and Petrarch.

For Jean Gebser, in any case, the “perspectival” consciousness structure and the “mental-rational” consciousness structure (or logico-mathematical) are synonymous terms, in that the tripartition of spaces in terms of length, width, and depth is reflected in the tripartite dialecticism of thesis, antithesis, and synthesis and which, as the form of “Universal Reason”, was deemed to by identical with the mind of God — the way God’s mind actually worked. This is, in fact, Blake’s demiurgos — the mad Zoa named “Urizen” (or “Selfhood” or “Nobodaddy” or “Satan” or “Ancient of Days”) who we’ve met earlier in The Chrysalis in Blake’s image of him as the space-bound eye of perspective perception, 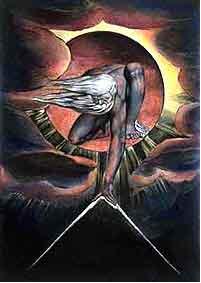 Urizen — Architect of the Ulro, “Ancient of Days”

You will, I hope, see that Urizen’s posture mirrors da Vinci’s perspective eye

da Vinci’s Perspective: the Eye and the Pyramid of Vision

Blake’s Urizen is the mental-rational/perspectival consciousness — space-bound and space-obsessed. And, as you may note, Blake depicts Isaac Newton in the exact same posture as his Urizen, which is Blake’s illustration of what he calls “Single Vision & Newtons sleep”. 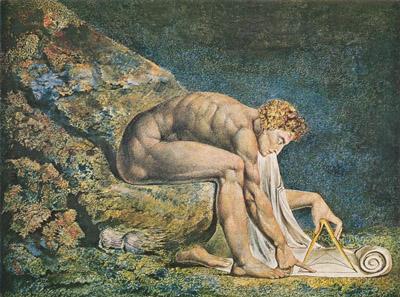 Since William Blake’s chief interest was the relationship between time (Ulro) and the Realms of Eternity, Newton’s space-obsessed “single vision” (or what we call “point-of-view” or perspectival consciousness) was, as far as Blake was concerned, madness. “Single vision” is not so much false as very incomplete, since it is an element of “fourfold vision”, or what Jean Gebser would call “aperspectival consciousness” (or “integral consciousness”) corresponding to his ideal “universal way of looking at things”.

And that brings us to the significance Picasso had for Gebser, and “the beauty that causes havoc”, as science historian Arthur I. Miller so aptly described it in his book Einstein, Picasso. Picasso thought perspectivism was “unnatural”, and you can see in his works the struggle to escape the fixity and trap of the “point-of-view”. Gebser notes that Picasso incorporates time and the flux into his painting, abandoning the “photographic effect” of earlier perspective representation. Some of Picasso’s paintings show shadows falling at different angles as the environment changes or the light changes as well as changes in colour, tone, shading, or hue. Picasso attempts to paint what we might call “the Heraclitean flux” of reality as we actually experience it — existentially. But many of Picasso’s more “cubist” or abstract paintings show something else in addition — Picasso abandons the fixed “point-of-view” reference coordinate and actually seems to go into orbit around the subject of his painting. To say that this represents multiple perspectives or various “angles” or different “points-of-view” all represented at once doesn’t quite do this justice. Picasso is exploring the “fourth dimension” — time and pursuing an integration of times and spaces in art, ie, holistic.

It’s this “orbiting” motion that suggests to Gebser the idea of the “sphere” as opposed to the “triangle” or pyramid as a more authentic “universal way of looking at things” and as symbol of the integral or “aperspectival” consciousness. What’s represented in Picasso is what astronauts also experience and describe as the “Overview Effect”

It’s in those terms that we might suggest that Picasso stands in relation to a “new Renaissance” as incipient form of the “aperspectival/integral” as Giotto stands in relation to the Old Renaissance of the perspectival consciousness. In that sense, yes, the “beauty that causes havoc” as Miller describes it is the disruption and dislocation of the fixity and rigidity of the “point-of-view”. Picasso is straining towards that “universal way of looking at things” that Gebser highlights as the chief characteristic of integral or aperspectival consciousness.

We might suggest another example of this “orbiting” in relation to the indigenous Sacred Hoop, without contradicting Gebser’s anticipation of the “sphere” as symbolic representation of the aperspectival. 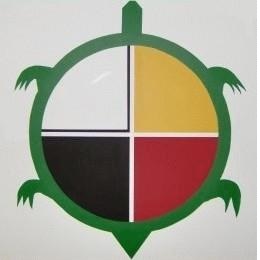 Imagine, rather, that Picasso is circumambulating or orbiting along the perimeter of the Hoop, around the central point, and faithfully recording everything he sees in his painting as he does so. And imagine that the colour quadrants or zones or dimensions are Gebser’s different “civilisational types” or “structures of consciousness”, which are also different temporal Eras. Or, for that matter, that the zones are representations of Blake’s “four Zoas”. Picasso would pass through all four to finish his painting — in Gebser’s terms, the “unperspectival”, the “pre-perspectival” or the “perspectival”; or, optionally, the archaic, the magical, the mythical and the mental-rational. That would also be a pretty good way of describing a Picasso painting in terms of “the beauty that causes havoc”, as Dr. Miller calls it.

A Picasso is a holon, not a pie-slice of reality. And that’s what “aperspectival” means — holonic.

I’m persuaded, then, that it is indeed the case that as Giotto stood in relation to the Renaissance and perspectival consciousness, so Picasso stands in relation to the “new Renaissance”, as it were, of integral, aperspectival, ecological, or holonic consciousness, or “overview” rather than “point-of-view”. But that may also have “unintended consequences” for our own present expectations about the future, just as it did for the “Old Renaissance”.