Dance of the Nataraj

If Da Vinci’s Mona Lisa has become iconic of the Western sensibility, the Dance of the Nataraj is that for the East. Both are master artistic achievements. Meditate upon them long enough and you will come to appreciate what differentiates the cultural traditions of East and West. They have become iconic of those traditions because they both touch on the realm of what is called the “numinous“. And, in some respects, the numinous can also be described in terms of “Factor X” (as discussed earlier).

For me, the Dance of the Nataraj (or Shiva’s Dance) is iconic of the whole turbulent period we are presently passing through, which we are calling “chaotic transition” — the crucible of times; the irruption of the paradoxical. Jacob Bronowski, in his book The Origins of Knowledge and Imagination, credits the current “crisis of mechanism” in the sciences (and by extension, in consciousness and culture more generally) with the irruption of the paradoxical.

Shiva’s Dance represents all that — that dance of what we might also describe as the paradox of “creative destruction”. William Blake also calls this “the Dance of Eternal Death”.  We can only understand the meaning of what Blake means by that through insight into the paradox of the Nataraj — the “Lord of the Dance”.
Shiva dances the apocalypse, and the word “apocalypse” can be translated to mean, also, “creative destruction” — the truth that comes only as shattering revelation.

Albion rose from where he labour’d at the Mill with Slaves:
Giving himself for the Nations he danc’d the dance of Eternal Death. — Blake, “Glad Day” 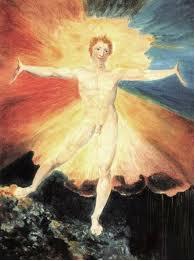 It is thought by some that Blake’s inspiration for “Glad Day” came from a verse of Shakespeare,

Night’s candles are burnt out, and jocund day
Stands tiptoe on the misty mountain tops.

If so, “Night’s candles are burned out” is also represented in the Dance of the Nataraj — as the corpse of the dwarf upon whose prone and prostrate frame Shiva dances his whirling dance.

Who is this dwarf? In a nutshell, the dwarf represents what Aristotle once called the Mikropsychos. Translated, the word signifies the mean-spirited, the petty-minded, the small-souled. Aristotle contrasted this with what he called the “Megalopsychos“, which here does not mean “megalomania”, but is more akin to the meaning of “Mahatma” or “Great Soul” — the overflowing soul; the superabundant soul that can’t help but give of itself continuously, and which, in fact, must give of itself and its superabundance continuously and generously or it becomes sick.  This superabundance — whether of life, light, love, joy, strength, knowledge — was the original meaning of the word “virtue”.  We sometimes call such a soul “expansive”.

Shiva’s dwarf represents the opposite of all that. The dwarf represents contraction. In Gebser’s terms, this is referred to as a “narrowing” — a narrowing of the possibilities of awareness into the “point” — the “point-of-view”, as contrasted with what he refers to as a “universal way of looking at things”. In effect, then, the dwarf symbolises that human “all-too-human” condition (Nietzsche’s phrase) that is also diagnosed by Blake, for the dwarf represents, in effect, the narcissistic soul

“For man has closed himself up, till he sees all things thro’ narrow chinks of his cavern”

In effect, too, Nietzsche’s Zarathustra was his ideal of the Megalopsychos or the Mahatma, the superabundant soul that overflows. Yet, even Zarathustra was only proto-type and prophet of the transhuman. Those who have not understood Aristotle’s meaning of the Megalopsychos, or the Mahatma, or the meaning of Blake’s Albion on his “Glad Day” will have completely also misconstrued the meaning of Nietzsche’s “overman” — likewise, Sri Aurobindo’s “supramental consciousness” or what Jean Gebser calls the “diaphainon“.

It is sometimes said that the dwarf upon whose corpse Shiva dances represents “ignorance”. True enough in that sense, although that is a somewhat limited way of understanding the meaning of the dwarf. In broader terms, the dwarf represents everything associated with the mikropsychos — the petty-minded, the mean-spirited, the small-souled, or, if you prefer, what is sometimes described as “sensate consciousness” or the “ego-nature”. In other words, it is our own “Selfhood”, as we understand this. The dwarf could very easily be said to be the perfect symbolisation of what we call “the culture of narcissism“.

Blake, by contrast, saw his task as being

To open the Eternal Worlds, to open the immortal Eyes
Of Man inwards into the Worlds of Thought, into Eternity
Ever expanding in the Bosom of God, the Human Imagination.

If we know, then, who or what the dwarf is, then who or what is Shiva? Well, in many respects Shiva represents what Jill Bolte-Taylor calls “The Life Force Power of the Universe”, and a force with which the “You of you” is identical. It would be quite permissible, in those terms also, to think of of Shiva and the dwarf in terms of Iain McGilchrist’s “Master” and “Emissary”.

What would you rather be? Shiva? or the dwarf? That’s also the question that Bolte-Taylor poses at the end of her TED talk on her “stroke of insight”, after all, isn’t it?

Shiva corresponds to Blake’s “fourfold vision”. That’s signified by the dancer’s four arms. Among other matters, Shiva’s four arms are reflected in Blake’s “four Zoas” who, for Blake, “reside in the Human Brain”. In those terms, therefore, Shiva is a symbolisation of integral consciousness, and is also the symbolisation of what Meister Eckhart called “The Aristocrat”, or what Ralph Waldo Emerson called “The Oversoul“.

Shiva is Blake’s Albion, and Albion is, for Blake, human destiny and man’s true nature — the “You of you” presently in process of manifestation that Blake tried to describe in his “prophetic books”. And this is what Gebser calls “the diaphainon” also. Shiva is, then, also the diaphainon. In those terms, Shiva is the representation of Gebser’s true “universal way of looking at things”. And it might also be said, in those terms, that the whirl of Shiva’s arms in the dance is also that theme of the “vortex” or apparent “chaos” or “havoc” through which we are currently passing.